Emma and Gavin may have their HEA…but will the sweet Cooper Kingsley find his dream girl after heartbreak?

Cooper’s gone off the deep end. After months away on a bender of booze and broads he finally thinks he’s ready to come home and face that his brother has won the heart of sweet Emma Bell. And while he may be ready for the boardroom, he’s not ready for the bombshell waiting in his office.

Corrine is thankful to have finally found a job that benefits her needs and the elusive boss is in is way in. She didn’t expect him to be so beautiful and tempting that she has to question her own morals. Spend her nights with him in bliss or live a life of wondering what might have been?

Where Cooper thought he had to win Emma, with Corrine he’s fighting an uphill battle. As he struggles to help her come to terms with her femininity and finding her own pleasure he has to wade through her past to her heart and towards a future that may be unattainable. Ryan delivers a heartfelt battle for Cooper proving that love can conquer all and that losing love does not mean losing hope on forever. 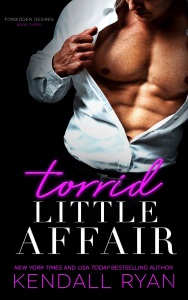 The best way to get over someone is to get under someone else. And I have the perfect candidate all picked out.

My new assistant is tempting beyond belief with her curvy body and take-no-shit attitude. All those luscious curves, and a juicy ass I’m already in love with. God, the things that I would do to that ass…

But it’s the haunted look in her eyes that speaks to me. Like she’s taken just as much shit in her past as I have—maybe more. We both deserve a little fun.

Love can’t fix everything. Mind-blowing sex and a few killer orgasms, on the other hand?

I have a feeling those might do the trick.

A New York Times, Wall Street Journal, and USA Today bestselling author of more than two dozen titles, Kendall Ryan has sold over 1.5 million books and her books have been translated into several languages in countries around the world. She’s a traditionally published author with Simon & Schuster and Harper Collins UK, as well as an independently published author. Since she first began self-publishing in 2012, she’s appeared at #1 on Barnes & Noble and iBooks charts around the world. Her books have also appeared on the New York Times and USA Today bestseller lists more than three dozen times. Ryan has been featured in such publications as USA Today, Newsweek, and InTouch Magazine.

Visit her at: www.kendallryanbooks.com for the latest book news, and fun extras