He’s young, he’s sweet, and he’s downright sexy. Beaux is here to be your next book boyfriend. He’s been working on catching the eye of his local waitress, Paige. And as any star quarterback, he knows when the throw the winning pass. After reading about his older sister, it’s time for little brother (who is SO not little) to find his HEA.

Paige works hard and it’s about time she plays just as hard. So when Beaux decides he wants to win her over she decides to play a little hard to get. He’s gotta earn her time since she’s been burned in the past. But what happens when her biggest fear comes true? Can Beaux handle her and the responsibilities that comes with loving a woman like Paige? Or will they both crash under the weight of Beaux’s stardom?

Where Dirty Player is filled with naughtiness, Filthy Player has non-stop sweetness. Paige and Beaux definitely fit together (in more ways than one!) and her bravery to give him a chance was endearing. I devoured this story in one sitting as Beaux charmed Paige (and me!) at every turn. The danger because of Beaux’s fame was a surprise that led for a delicious bout of drama as Paige tried to come to terms with not only her relationship with Beaux but how it affects her life. With a twist that I NEVER saw coming this was a shoe-in five star read! 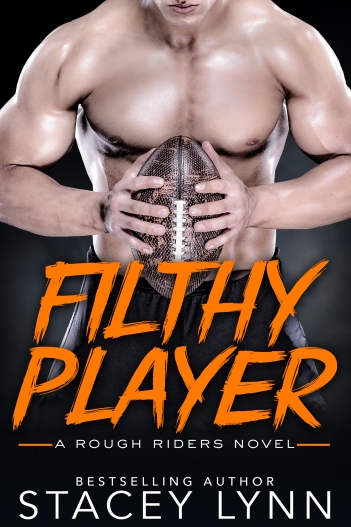 The Raleigh Rough Riders are back, and this time Super Bowl Quarterback Beaux Hale finds himself playing the most important game of his life.

Every woman knows Beaux Hale is nothing but a player. Yet the first time he walks into Paige Halloway’s restaurant and flashes his sexy grin, she feels a heat between them spark. Too bad he opens his mouth and ruins it.

He may think his money, fame, and sexy looks will attract any woman—but he’s wrong.

Paige doesn’t have time for a man. She’s too busy keeping a roof over her head and taking care of her father to care about relationships.

Lucky for Beaux, he’s a man who’s ready to use all the plays at his disposal. He didn’t bring his team a Super Bowl victory by giving up at the first block in his path—and Paige Halloway has just become his new long-game.

Beaux also knows that sometimes, in order to win and claim your prize, you have to get a little bit filthy. 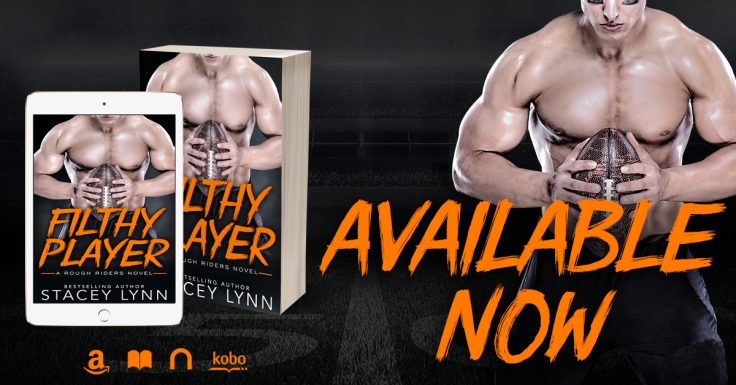 Stacey Lynn currently lives in Minnesota with her husband and four children. When she’s not conquering mountains of laundry and fighting a war against dust bunnies and cracker crumbs, you can find her playing with her children, curled up on the couch with a good book, or on the boat with her family enjoying Minnesota’s beautiful, yet too short, summer.

She lives off her daily pot of coffee, can only write with a bowlful of Skittles nearby, and has been in love with romance novels since before she could drive herself to the library.