Oh Myla, a tough cookie out to survive a world she had no intention to enter. When trying to make it as an actress lands Myla in the arms of one of the world’s most dangerous cartel leaders, she has to depend on her ability to adapt to survive his crazy moods. In walks Kyle, her supposed new bodyguard. But it seems he holds more secrets than she does when it turns out he’s here to save her from an evil man’s clutches.

As Myla navigates her new world, she also has to deal with her new attraction to Kyle. Can she truly trust him? Kyle know she’s got to tread lightly in order to gain Myla’s trust. But with her sister breathing down his neck to save her he’s got few chances left before all hell breaks loose.

Action and suspense form start to finish, these two electrify the page as the try to survive a cartel lord’s world AND each other. Can love truly conquer all?

Where our first Walker Security novel has action leaping off of every page, the second will leave you wondering just what will happen next. Sierra’s on the run…her murderous husband has plans to kill her next and she’s had enough of cowering in his shadow. Just when she thinks she’s made another successful attempt at hiding she’s thrust into the world that is Asher and Walker Security. Bartender by night and ex-SEAL by day, this badass blonde has her in his sights and Sierra knows there’s no escaping.

When Asher truly learns her secret she can’t tell him everything…cause it just may get him killed. But what Sierra doesn’t know is that Asher’s own secrets mix with hers. His current case of a drug dealing serial killer puts her right in the cross hairs. And it turns out that the partner was someone we never expected. With what-ifs and turns at every corner, you won’t know who to trust until the final dramatic ending.

Unfortunately for me and this story was the lack of heat between our hero and heroine. There’s argument after argument in every chapter and I felt like yelling “enough” at these two. But what lacks in chemistry Jones’ makes up for in action. The whole team is in your face for this case and I truly had no idea it would end the way it did!

He is blond, tattooed, and dangerous. She’s as beautiful as she is mysterious and could be his destruction…

Asher wasn’t always a member of the elite Walker Security team, he was a billionaire’s son, who rebelled against his father’s controlling hand, and ended up in New York City’s underground of drugs, rock n roll, and danger. But that is long behind him, and while his tattoos and long blond hair remain, he’s now a chameleon, far more comfortable in a suit and tie than a leather jacket.

Or so he likes to tell himself.

But now Walker Security needs him back inside the underground club scene for a police case they’re working. Women are dying, murdered, and the clock is ticking until another victim is claimed. When Asher is pulled back into this toxic world he meets Sierra, who is as beautiful as she is mysterious. A woman who calls to a darker side of him, long suppressed, unleashing it in what becomes wicked hot passion and obsession. But Sierra has a secret, one that leads her, and Asher, to a dangerous place, and game, with dangerous players, and the game is about life or death.

She leans into me, her head resting on my shoulder, emotion that isn’t pleasure radiating off of her and crashing into me. I cup her face and tilt her chin up, my thumb stroking her cheek. “What are you thinking?”

“Nothing. Everything. Can you kiss me again already?”

“Where do you want me to kiss you? Tell me.”

“Everywhere.” She pushes to her toes, and her lips find mine, looking for an escape, trying to drive her demons away.

I want to demand her answer, make her tell me where she wants my mouth, but I feel her desperation, her need to escape whatever is in her head. And so, I press my lips to hers, I kiss her mouth, drinking her in, and I don’t taste him this time. I taste her. I taste us. I taste need and hunger and passion. “I want you naked,” I say, my hands sliding inside her jeans and panties. “In every possible way, Sierra.”

“I’m pretty sure I’m already there, and it’s terrifying.” She flattens her hand on my chest. “If you turn into an asshole, I swear—”

“You can punish me,” I promise, “and I’m still willing to offer suggestions.”

“If you turn into an asshole after I trusted you,” she says. “I won’t need suggestions, Mr. Ex-Navy SEAL who won’t be able to hide from my wrath.”

Fuck, I’m crazy about this woman. “Good thing I’m not going to turn into an asshole. I want you naked,” I repeat, and this time, I make it happen. I lower myself to one knee and take her jeans and panties with me. My arm wraps her waist and I lift her, dragging her clothing away, and setting her back down. My hands settle on her hips then and I look up at her. She stares down at me, the simmering look in her eyes all about arousal, submission. And I want that from her and not because it’s some sex game, of which I could play and play well.

I press my lips to her belly and just that easily she trembles, and it only makes me want more. Everything is more with her.  I drag my mouth lower and lower…

OTHER BOOKS IN THE SERIES 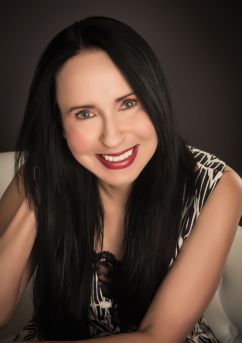 New York Times and USA Today bestselling author Lisa Renee Jones is the author of the highly acclaimed INSIDE OUT series. Suzanne Todd (producer of Alice in Wonderland) on the INSIDE OUT series: Lisa has created a beautiful, complicated, and sensual world that is filled with intrigue and suspense. Sara’s  character is strong, flawed, complex, and sexy – a modern girl we all can identify with.

In addition to the success of Lisa’s INSIDE OUT series, Lisa has published many successful titles. The TALL, DARK AND DEADLY series and THE SECRET LIFE OF AMY BENSEN series, both spent several months on a combination of the New York Times and USA Today bestselling lists. Lisa is also the author of the bestselling DIRTY MONEY and WHITE LIES series. Presently, Lisa is working on her Murder Girl/Lilah Love series to be published by Montlake.

Prior to publishing Lisa owned multi-state staffing agency that was recognized many times by The Austin Business Journal and also praised by the Dallas Women’s Magazine. In 1998 Lisa was listed as the #7 growing women owned business in Entrepreneur Magazine.

Lisa loves to hear from her readers. You can reach her at www.lisareneejones.com and she is active on Twitter and Facebook daily.

Connect with the Author: